Safety heat exchangers from Universal Hydraulik in operation at MTU

Cooling is everywhere in engine construction: test stands, electroplating, hydraulics and so on. At MTU Aero Engines in Munich groundwater is used for this purpose. Special heat exchangers are used to ensure that it is not put at risk. 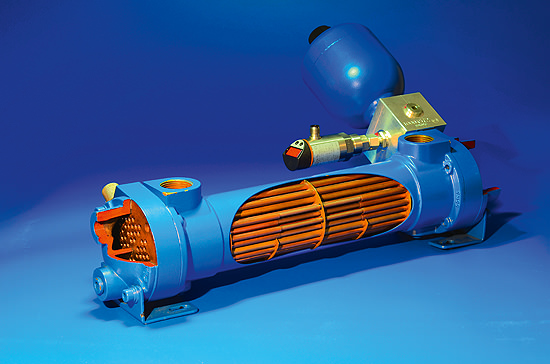 Sectional view of safety: Clearly visible in the middle are the dual tubes which prevent fluids from mixing together in the event of damage and which can be used to switch off the cooling unit. This protects both the fluid to be cooled and the cooling medium.

It all started with hazard analyses in 2003 and 2004, when machinery at the Munich plant of MTU Aero Engines was examined for potential safety risks – to operators and the environment alike. “We use well water for cooling here, you see,” explains Josef Remmele, who coordinates special plant maintenance services at the site. “So of course it’s important to make sure that all the equipment used for cooling substances hazardous to water is as safe as possible.” In fact, abundant groundwater flows from the Alps in a northerly direction, with the whole of Munich situated on a gigantic lake as it were. The water is accessible at depths from three to 25 metres and is there all year round at a constant temperature of around 11° C. It is ideal for use as a cooling medium, as there is no outlay for seasonal adjustments and calculations are simpler. MTU therefore has a longstanding agreement with the Munich Office for Water Management and has five wells in operation from which groundwater is extracted, used as a cooling medium and then fed back in via nine replenishment wells. It must be fed back in at a temperature no higher than 18° C and, needless to say, no harmful substances must enter the water. 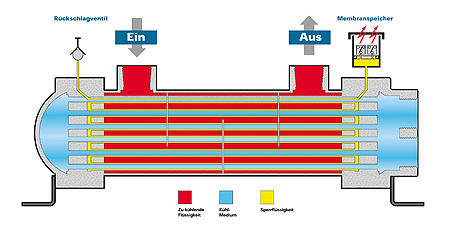 Operating principle of the safety heat exchanger: It is basically a tubular heat exchanger whose tubes are slotted into each other. A pressure-monitored sealing liquid flows between cooling medium and fluid.

Managers at MTU were thus clear on two points: safety standards should conform to the latest technology and the best possible technical solution should be sought. This would then apply to new equipment, whilst all the existing machinery would also be retrofitted. As well as protecting the environment, this would form the basis for future extended permits to extract water, which were also issued in 2008. But first things first.

Safety cooler for a diverse range of applications

First of all, Josef Remmele went through the plant with his project team and inspected every piece of equipment. On the basis of the findings of this study the purchase was accompanied by a call for tenders. “We analysed the market: who has the right technical product for this and who offers the right price?” says Remmele. “And we finally opted for the safety heat exchanger from Universal Hydraulik.” Because the heat exchanger not only protected the groundwater but also made processes even safer, he said, the components had even found their way into the company’s own delivery specifications. All newly installed equipment had since been fitted out with the safety heat exchanger from the outset.

But the existing machinery has also been modernised. “Of course it took three years to get through them all. We took the project one step at a time,” sums up Josef Remmele. Between 2004 and 2007, 92 pieces of equipment were retrofitted. “Counting the new machines, there must be around 150 heat exchangers from Universal Hydraulik in operation today,” adds the service engineer. 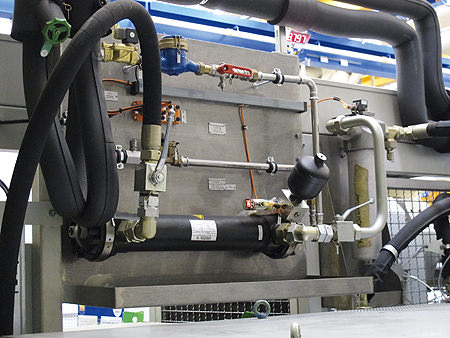 Heat exchanger in action. Whether used for cooling test stands or hydraulic machines, the safety cooler is a mandatory requirement at MTU.

Two heat exchangers in one

But how does this safety heat exchanger work? What makes it so special? In principle, it consists of two tubular heat exchangers that slot into each other. As with any corresponding heat exchanger, there is a hot and a cold side. The safety heat exchanger has now incorporated another thin barrier layer between the tubes placed inside each other. A small amount of sealing liquid is introduced into this interim system, charged with pressure and then sealed and kept at this pressure. In the event of upward or downward deviations in this pressure-monitored system the pressure switch turns in both directions – depending on whether the outer or inner tube is destroyed.

Potential damage keeps within limits: in the event of damage a little fluid flows from the hot side into the small intermediate circuit. In the event of damage on the cold side – the water – a small amount of sealing liquid which is not hazardous to drinking water flows into the water. In the worst-case scenario the system will raise the alarm and, depending on the application, can activate a variety of functions – a stopcock, an alarm light, a loud noise, an emergency stop or the controlled shutdown of the system. “Basically, we still have a fully functioning heat exchanger,” explains Pascal Springer, a heat exchanger sales engineer with Universal Hydraulik in charge of the South-East region. “Only one half of the heat exchanger is destroyed, so to speak.” The cooling water is thus protected for longer. “There are certainly ten or eleven systems on the market, but we are currently the only supplier with electronic monitoring in all directions. I can put the machine in the basement without having to check every day whether anything is leaking or faulty,” says the sales engineer, highlighting the unique feature of the cooler.

So safety works in both directions: firstly, the sealing liquid is specially selected to ensure that it does not impair the cooling medium or the fluid to be cooled and, secondly, the existing quantity is so low that damage is avoided to the greatest possible extent. “If I have a hydraulic press which has a 10,000-litre oil tank and the oil is saturated with water, then I have to clean the entire oil container, which is very time-consuming and expensive. On top of that, 10,000 litres of oil have to be disposed of,” points out Michael Uhl, managing director of Universal Hydraulik. The water in the system could also damage valves, proportional systems and pumps, so the equipment would require very expensive repairs as well.

The costs of safety

The issue of safety is frequently one of cost. The cost of safety technology on the one hand and the cost of possible damage on the other. At MTU Aero Engines the potential for damage is high: test
stands and hydraulic systems, milling, grinding and welding machines, electroplating and much more besides – valuable machinery and expensive downtimes. Even worse would be the contamination of drinking water. It is well nigh impossible to put a number on the ensuing costs and damage to corporate image.

A diverse range of applications

Josef Remmele is nevertheless satisfied with the safety heat exchangers, not least because of their diverse range of applications. “We have installed a temperature probe on many machines. The cooling water is regulated in line with the requirements of machining processes. Mechanical temperature control devices and electronically adjustable valves are both in use.” If a machine tool could be stopped automatically, he said, in the case of test stands employees had to decide how quickly they could shut down the machine. Models on which the medium is caught in a collection pan are virtually impossible to shut down slowly if the pan is not to be absolutely huge. “In this respect the safety tubular heat exchanger has emergency running properties that we wouldn’t be without now,” says Remmele.

The devices also differ internally: “In terms of the engine load unit, for example. We work with Skydrol here. Skydrol is a hydraulic oil used in aircraft construction, flame resistant and very complex chemically speaking, especially where seals are concerned.” And yet the basic principle remained the same. “But the right combination of materials must be used for pipes and seals, and this is where Universal Hydraulik is always really flexible,” commends Remmele. 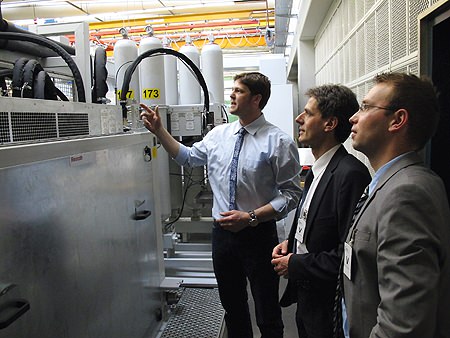 Universal Hydraulik employs around 50 staff at its head office in Neu-Anspach. There is also a production facility in Putim in the Czech Republic. Universal Hydraulik specialises in the design and manufacture of heat exchangers and cooling systems for fluids of every kind. The company also supplies hydraulic systems inclusive of pneumatics, lubrication, cooling and electrical control systems. In addition to this it distributes and sells hydraulic components such as pumps, cylinders, filters and valves, and acts as an agent for the Racine and Mahle manufacturing companies.

MTU Aero Engines is Germany’s leading engine manufacturer and probably the fifth or sixth-largest engine manufacturer in the world. New business in the civilian sector, engines and spare parts account for 40% of turnover. Civilian maintenance services make up a further 40% and the military sector 20%. The company is a global supplier of maintenance services, with servicing affiliates in China and Canada, and in Malaysia along with Lufthansa Technik. MTU Aero Engines employs 7900 people worldwide, and around 4500 at the Munich site.