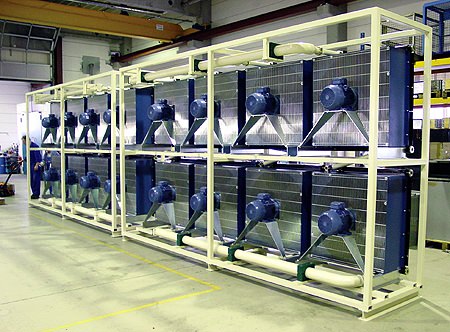 Due to the lack of a cooling tower and corresponding available water circuit, a system specialist developed a solution comprising two inter-linked cooling circuits for dissipating the cooling output of a large hydraulic press.

The task was to dissipate the cooling output of a large hydraulic press. However, there was no cooling tower or similar water circuit available. Two different, inter-linked cooling circuits therefore had to be designed. Universal Hydraulik GmbH connected the primary circuit (oil/water cooling) to a sealed, short secondary circuit (water/air cooling) and designed both cooling systems. The poorer thermal properties of the air and the higher noise level of the air cooling were disadvantages that had to be accepted.

In order to cool the press by means of the bypass flow, a cooling filter system was developed as the first step which was based on oil/water cooling. Since there was no water available, an oil/air cooling circuit was connected as an exterior installation which permanently recirculated the limited water volume available. The heated water/glycol mixture (50/50) was recooled directly in the oil/air cooling system before being fed back. Instead of a cooling tower, and in addition to the air cooling, only a small compensating container was required.

The primary circuit was installed below the hydraulic assembly in order to hold the large oil volume. The flow of 2,755 l/min. was circulated by a screw pump with a pressure-limitation valve at 55 °C at a maximum pressure of 15 bar. The 90 kW motor operated at 575 V/ 60 Hz and 1,750 rpm. The motor was manufactured electrically and mechanically in accordance with NEMA. The oil was filtered by a bypass filter with a filter unit of 5 mm and 0.4 bar pressure loss.

A 1.5 to, screwed, plate heat-exchanger from Universal Hydraulik GmbH was used as the oil/water heat-exchanger. The TL-650 with 109 plates was able to dissipate 525 kW of cooling output with a pressure loss of only 0.7 bar. The water/glycol mixture was heated up by a maximum of 3.5 °C, which lead to the secondary circuit.

The secondary circuit consisted of a water pump with a capacity of 2,500 l/min, an oil/air cooling system and a 200 l compensating container. The water/glycol mixture was cooled down by 3.5 °C and fed directly back into the plate heat-exchanger of the primary circuit.

The oil/air cooling system consisted of a total of 16 large oil/air coolers of the LKI series. This range was developed by the firm of Universal Hydraulik GmbH. This cooling system in turn had to be capable of dissipating 525 kW at max. 30 °C ambient temperature and only 0.68 bar pressure loss. Due to the exterior installation of the oil/air cooling system, the oil/air coolers also had to be able to withstand minus temperatures as low as–45 °C. The electric motors were also designed electrically to NEMA, and were also CSA-approved and equipped with static heating for when they were not operating. The fans had to have a capacity of 72 m3/s of air at 15.4 kPa pressure loss.

The 16 large oil/air coolers were connected in a combined series-parallel arrangement on two stands, each approx. 5 m long and 3 m high. The complete piping of both cooling circuits was installed in accordance with ASME specifications.

As a system specialist, Universal Hydraulik GmbH was able to design and manufacture both cooling circuits. The equipment of both systems with their own coolers proved to be a further benefit. 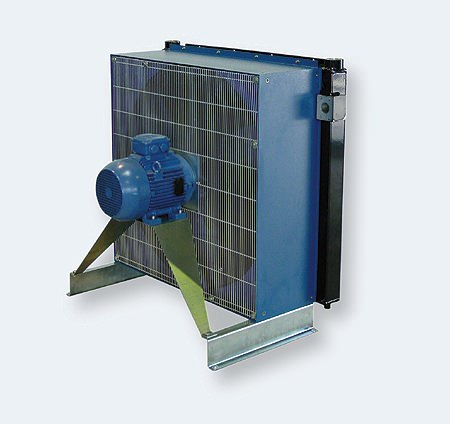