Cool technology for all areas of application

Fire engines, gearbox manufacturers, wood working, mechanical engineering, in fact anywhere where oils are used, there is cooling. This is why the hybrid cooler from Universal Hydraulik comes in many differed versions.
by Wolfgang Kräußlich 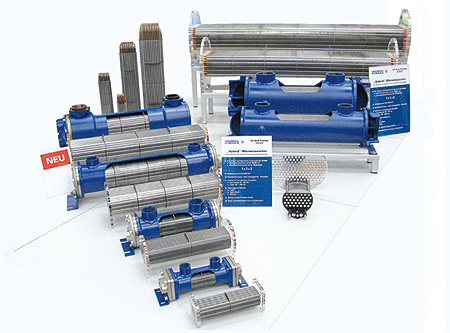 It is something of a speciality of the company based in Neu-Anspach near Frankfurt: the hybrid cooler. With the combination of a tubular heat exchanger and plate heat exchanger, Universal Hydraulik has made a name for itself in the industry. The special innovation here was to fit a shell & tube heat exchange with fins in order to significantly increase the surface of the cooler. It was therefore possible to reduce the size of the component and market it at a lower price.

“The trend towards energy efficiency also affects us as manufacturers of heat exchangers, as increased cooling is required to achieve this”, explains Michael Uhl, junior manager and son of the company’s founder Ralf Uhl. “We have been very successful with this concept, which we have expanded considerably over the past few years.” The main market for Universal Hydraulik is still Germany.

However, the fluid industry is also affected by globalisation, which means that coolers from Hessen are increasingly being installed in Asia or South America – with interesting impacts on product development.

One step back to go two steps forward
A problem often overlooked is the quality of water in the fast developing emerging countries. There are now a very large number of machine manufacturers who are coming up against extremely poor water conditions in South America or Asia.

The result: the water side of the cooler gets blocked very quickly, be it a plate or tubular plate heat exchanger. “The oil side does not pose a problem; this is still as clean as it was to start with, even after 20 years”, stresses Michael Uhl. The objective of the entire mechanical engineering industry is to optimise the technology, he explains. The oil side is no longer a problem thanks to the multiple and finer filters, improved oils and proportional valves, he confirms. However, mechanical engineers have absolutely no control over the water side, he admits. “We build a press for several million euros, install great technology in it and it is then connected to the end customer’s mains and water supply. And if the customer has dirty or aggressive water, then at some point it will damage the cooler and the mechanical engineer will be approached by the end customer with the complaint that his machine has not lasted”, says Uhl, describing a typical scenario. As little emphasis is placed on the water side in terms of treatment or filtration in the new markets, Universal Hydraulik now offers suitable products for these ambient conditions. The tube diameter of the hybrid heat exchangers has been increased from four to ten millimetres to avoid a blockage of
the water side. In principle this is technically a small backward step, as it represents a departure from the optimum performance ratio on the oil/water side in order to take account of the poor operating conditions. It makes sense though: although the cooler is a rather small component within a machine, it can have a major impact on the reliability of the system as a whole.

Outlook
Universal Hydraulik has put itself in a strong position with the hybrid cooler. The product portfolio is continuously being expanded, as a result of which cooling capacities of 2 - 2000 kW are now possible. The installation sizes vary from diameters of 65 - 325 mm with lengths of up to 3000 mm. Variable designs, connections and materials and optional bypass valves mean that there is a huge selection of products to choose from.

Universal Hydraulik used to build hydraulic systems and only turned to manufacturing coolers later. In addition to cooler components, it therefore also offers complete cooling filter systems that customers can incorporate into their system. “We design the system to meet the customer’s needs” confirms Michael Uhl. “Even to the extent that the customer provides us with his construction drawing, and we design our system specifically for this component.” That is a useful synergy of experience in plant engineering and the construction of components. Uhl also sees the company’s history as another advantage: “We come from the hydraulics sector. We are familiar with the customer’s system and can choose products with a far greater degree of care and precision for the customer.”

“We believe in the market”

The general financial crisis has also affected the fluid industry. What were the impacts for you?
Ralf Uhl: We are represented in the entire mechanical engineering sector, as heat exchangers are required everywhere. This broad platform has cushioned us against the impacts of the crisis. There are sectors such as machine tools, construction machines, press making or shipbuilding that have seen extreme slumps in the last year. Other sectors on the other hand are considerably more stable, for example wind energy. Overall, this has meant that the development of our sales has been in line with the average for the mechanical engineering sector as a whole.

Which means?
Ralf Uhl: Let me put it this way: We were in the black in 2009 and did not lay any of our employees off. At the same time, we made the highest investments in the company’s history and are planning to invest an equally high amount for 2010. We believe in the market and want to prepare anti-cyclically for an upturn.

Has the behaviour of customers changed during the crisis?
Michael Uhl: The market has changed completely. You have to deliver much more quickly now, you have to offer a very high level of quality and reliability – at a price that is competitive.

How can you do this?
Ralf Uhl: We have been lucky. We started optimising and adapting our internal processes three years ago, including using Kaizen workshops. This helped us greatly right from the outset of the crisis, as we were coming from a strong position and had utilized much of the potential to save costs.

But is the squeeze on prices from abroad not very high?
Michael Uhl: Well, we are able to fight off the competition from the Far East by operating a production in the Czech Republic that is on a similar price level but available within Europe extremely quickly, while still maintaining our high standard of quality. However, we did not go to the Czech Republic in order to relocate a production, but to produce a new product there for the right price. We have also strengthened our position in Germany as a result. We have also grown in Germany as a result of this new product group, the hybrid coolers.

Quality seems to be very important to you...
Ralf Uhl: Yes. Any damage to a cooler costing a few hundred euros can cause damage to a hydraulic system costing several hundred thousand euros. Once you know that, the components must be designed so that damage is more or less impossible. We have committed ourselves to ensuring this. Our coolers are monitored in five test steps, once even at 180 bar. I know of no other manufacturer that tests its coolers at such high pressures. We could dispense with some of the test stages and the cooler would be cheaper, as the reject rate would be lower. But that is not our aim. We are known in the market for a high standard of quality, and we want to maintain this standard.